Performances in the Everyman Palace Theatre

In April 2013 we completed our 8th annual pantomime in the Everyman Palace Theatre. These productions give an opportunity to each and every student of the Wolfe Stage School to experience a professional theatre production. Scenery, Sound, Lighting, Stage Management, Costumes and production are areas that are available for our students to experience. A number of past pupils have gone on to pursue careers in these fields after being exposed to them during these performances. 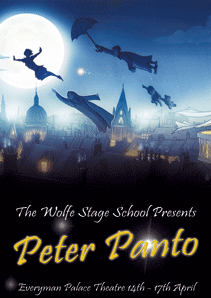